Baltimore is the 8th Most Segregated City in America

Of the 28.7 million black Americans living in the nation’s largest metropolitan areas, nearly one-quarter reside in segregated neighborhoods — where at least 80% of residents are black. People living in urban areas are even more likely to be isolated, with 44.4% living in homogeneous neighborhoods, where the vast majority of residents have the same skin color or ethnicity.

Nearly 14% of U.S. residents are African American. Therefore, if 14% of each community were black, the United States would be perfectly integrated. For the 100 largest metropolitan areas, this is never the case. 24/7 Wall St. reviewed large U.S. metro areas containing at least one census tract — small statistical areas — where at least 80% of the population is African American. The most segregated metro areas have the largest percentage of black area residents living in these racially homogenous communities.

Detroit is the most segregated metro area in the United States. Among the city’s 962,000 black residents, 57.7% live in predominately black neighborhoods.

Richard Rothstein is a senior researcher and segregation expert at the Economic Policy Institute, a left-leaning think tank. In an interview with 24/7 Wall St., Rothstein said there is a distinction between segregation and ethnic and racial homogeneity, which unlike most isolated African American communities, could be related to immigration patterns, grouping due to shared language, and so forth. “Only African Americans were segregated by a century of explicit federal state and local policy,” Rothstein said.

After investigating the Baltimore City Police Department, the U.S. Department of Justice found that police in the area routinely violate the constitutional rights of residents and federal law. Baltimore police use enforcement strategies that encourage unconstitutional stops, searches and arrests that disproportionately affect African Americans, as well as excessive force, the DOJ found. In an essay following the DOJ report, Johns Hopkins University professor Lester Spence wrote, “In effect, the city is producing and reproducing a population that has no functional purpose other than to be policed.” 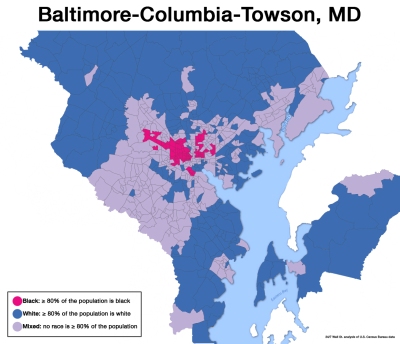 The United States has a long and troubling history of race-based housing segregation. Until the fair housing act was passed in 1968, municipalities and private realtors were able to legally force African Americans to live in separate neighborhoods. The long-term consequences of these policies, coupled with the continuing trend of white flight, has entrenched segregation and the resulting inequalities in U.S. metropolitan areas.

Not all racial segregation can be blamed on discriminatory housing policies. The path towards integration is not set, and while activists and lawmakers struck a blow against segregation during the Civil Rights movement of the 1950’s and 60’s, it persists in different, perhaps more subtle forms to this day. One such example is the process of gentrification taking place in many urban U.S. areas. Rothstein noted that gentrification is often mistaken for integration. In neighborhoods where the population was “once all black, and now they’re mixed, but in 10 years they’re going to be all white, that’s a misleading indicator of integration,” he said.

One of the most serious and observable long-term consequences of residential segregation can be seen in the public school system. School funding is largely determined by property tax revenues. In metropolitan areas characterized by wealthy white neighborhoods and low-income black neighborhoods, therefore, schools in white neighborhoods are much better funded. Consequently, white children are much more likely to succeed than black children in a nearby neighborhood, even as they are attending classes often just a mile or two away.

While a range of factors affect disparities in educational attainment on a racial level, the effects of segregated housing on learning outcomes are evident. Among white adults nationwide, 89.1% have a high school diploma and 34.9% have a bachelor’s degree. For black residents 25 and older, the corresponding educational attainment rates are 84.9% and 21.0%. In many of the most segregated metropolitan areas, the differences are much larger. For example, in Milwaukee — one of the more segregated U.S. metros — educational attainment rates of white residents are comparable to national figures, but just 80% of black adults have graduated from high school and just 12.4% have a four-year college degree.

Speaking to the Cleveland Plain Dealer, Marjory Givens, associate scientist with the University of Wisconsin Population Health Institute said “Highly segregated neighborhoods tend to have environmental hazards, often elevated crime levels, and segregated residents in general have fewer opportunities for good education or a job that pays a living wage, or access to health care and healthy food.”

Maryland’s Vaccination Rate is Higher Than Most States

Maryland Has the 4th Highest Rate of McDonald’s

Theme by Anders Noren — Up ↑